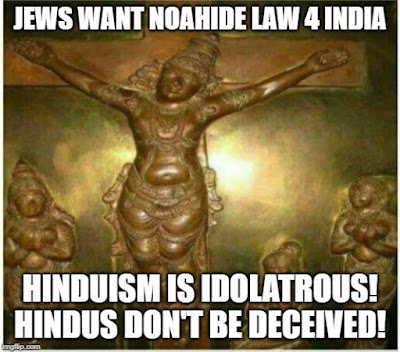 If You Are Unfamiliar With The Noahide Laws vist:
STOP NOAHIDE LAW
www.StopNoahideLaw.blogspot.com

In their quest to promote Noahidism above all others, Noahide apologists are keeping nothing back when it comes to bashing Hinduism. Here we find one Rabbi Tuvia Bolton, who loves Rabbi Schneerson, a man who said non-Jews have "satanic souls" (here), he also believes it is important to promote the Noahide laws among non-Jews. In this writing he relays a story in which he promotes the idea that because a Hindu guru does not have the Torah he behaves like an animal thief. He also calls Hinduism "idolatry" and says India is full of "lies".

The Torah is not just a religious book. In fact when the Torah was given the entire universe, including all of mankind, changed:

The Jews became a unique, holy and priestly nation (Exodus 19:4,5) and the rest of mankind became their pupils.

Or, in the language of Maimonides: "G-d commanded Moses to bring the entire world's population to observe the (seven Noahide) commandments* - and they must do so (not from their own logic but) because these commandments were given by G-d to Moses in the Torah." (Laws of Kings 8:10,11).

At first glance this is not understood.

Isn't it enough to just act normally and reasonably? A lot of people simply don't have religious tendencies; why is it so important that everyone serve G-d?

And why must it be according to the Jewish Torah, what's wrong with the other religions?

To answer this question here is a story:

Sarah (fictitious name) wasn't like the other myriads of thousands of confused Israelis searching the world for their 'real' selves.

She had found what she was looking for

After experiencing a variety of what India was famous for: drugs, gurus, miracle workers, yogis and other charlatans, she was just about to give up, when she heard about a small secretive group that was different, deep in the forests of India.

It took her several weeks to find them but when she did she immediately sensed that it was for her. True, she had thought so tens of times before but this time it was real. Their guru was humble and calm yet she sensed an inner fire burning… the same fire that was burning in her soul!

The group was very reluctant to admit new members but that made it all the more appealing. She made up her mind; she had to join no matter what. Finally her life would be worthwhile.

The initiation was difficult and demanding but she passed and threw herself completely into a new life of purification and meditation. For months she rose higher and higher in devotion and spiritual purity until her instructor recommended to the head guru that, considering her amazing progress, she was ready to take the big step and be anointed as a priestess! Sarah was headed for a life of bliss and total surrender to the eternal!!

Interestingly, all this time she had managed to find a few minutes each week to call her parents in Holon, Israel and although she usually kept the conversations short and vague this time she couldn't contain her joy.

A priestess?!! Her parents, although they were not religious were aghast; they never dreamed it would come to this! But their protests only aggravated her. She had her own life to live and her own soul to save.

After all, what did they have to offer? Money? Television? Marriage? Feh!! She had found the truth and nothing would stop her.

But as 'fate' would have it, exactly at this time her beloved grandmother passed away in Israel; one day before her next call home.

The bad news shocked her and when her parents suggested that she return she agreed and asked them to delay the funeral until her arrival.

She took the first plane out and made a point of buying a round trip ticket for two weeks; she would use the opportunity in Israel to say her last good-byes to everyone she knew before turning over her life to the guru.

But her parents thought otherwise; they were determined to do get this crazy idea out of her head. The day after the funeral they brought rabbis, professors even a psychologist or two, but they underestimated her convictions. She remained untouched. Nothing they said or did had any effect whatsoever - and the days passed like minutes.

On her second Shabbat, the day before her flight back, her father requested that she accompany him to the local Chabad synagogue and speak to the Rabbi; Rabbi Meir Halperin.

When they arrived the Rabbi was in the middle of giving a class on the commandment of retuning lost objects (HaShevat Avaida). He brought several essays of the Lubavitcher Rebbe to illustrate his point: That although this commandment seems to be logical, it really isn't and must be done only because it is the will of G-d.

Sarah exploded! "What!" She exclaimed. "What is wrong with doing good because it makes sense? Do you think people are so bad or stupid that they don't know to return things? And who says G-d gives commands anyway?! Maybe your G-d does… but not my god!! My god is nature! Spirit! When one is in tune with nature one will automatically do good!

After the class she calmed down and they spoke for a while. Although the Rabbi said some interesting things, especially about how nature without the Torah can bring man to be an animal or worse, Sarah was unimpressed. She longed for her guru and the forests of India. The next day she boarded the plane and flew back...for good.

The ritual began early in the morning and was to reach its grand finale on the top of a high mountain at sunset.

It was a clear, beautiful day. The previous night she had purified herself through fasting and prayer and now, along with five other prospective priests, she was slowly ascending the mountain led by their holy guru and several of his assistants…. leaving the mundane world far below.

Then, about an hour before they reached the summit, something on the ground caught the guru's eye. It was a wallet. He gracefully and swiftly bent down, picked it up and put it in the small pouch he had strapped to his side.

But Sarah happened to notice. She quickened her pace till she was next to him and softly suggested that he look in the wallet to see if there was identification.

"No" he answered calmly, looking at her with deep all-knowing eyes. "If god has caused it, then so it shall be. The ways of god are unfathomable."

Sarah continued in the procession but she was confused. The words of Rabbi Halperin kept ringing in her mind. 'Man without Torah can be like an animal' and the words of the guru didn't make sense.

Finally they reached the top. A large bonfire was burning, it's light was flickering off their faces and white robes with the darkening sky in the background.

The guru broke the silence. "Are you all willing to take the most important step in your lives?" he said majestically looking at all of them with compassionate eyes

"Yes!" they all answered stoically almost in unison - except for Sarah.

The Guru turned his gaze to her. "And what about..."

The guru calmly answered. "Very well, we cannot accept one who is not certain. Let you return to the city and when you are sure, we will return here."

Sarah descended the mountain with one of the guru's assistants and early next morning took the first plane out which happened to be to Australia. She just wanted to get away she didn't really care where to; just as long as it was as far away as possible from the idolatry, impurity and lies of India.

She spent a while by friends and it was there she met another Shaliach (representative) of the Rebbe; Rabbi Eli Riskin. She really found what she was looking for; Judaism. It is through Rabbi Riskin that this story comes to us. (Ha'Geula #237)

This answers our questions.

G-d is not a just a spirit or a power as the other religions (or the guru in our story) believe; rather He is the Creator. And He creates all being constantly even the physical and spiritual.

This is the G-d of the Jews…. and He is incomprehensible

But there is something even more incomprehensible: G-d has a REASON for creation.

That is why He gave the Torah to the Jews on Mount Sinai and in it the instructions for each creation (including the Noahide commandments for the non-Jews): Because man cannot come to the truth on his own.

Even more, the Torah was given before millions of eye-witnesses and has been read in public in every congregation at least once a week, every week since then so that no one can say it never happened, G-d forbid, or it changed, G-d forbid!

That is why logic, ideals and even religions must fail.

One of the most 'advanced' nations of all time; Germany and one of the most promising utopian ideals of all time; Communism, brought satanic chaos to the entire world. Islam today is preaching (and practicing) death and destruction and 2,000 years of Christianity has brought anything but heaven on earth.

That is why G-d chose the Jews: to make the entire world a holy, meaningful, peaceful and blessed place for all mankind.

And with the giving of the Torah came not just the knowledge but the power to do so as well - and NOW is the time to do it.

As the Lubavitcher Rebbe said time and time again; We are now in the age of the Moshiach. Up to now it has been dangerous to publicly expound these seven Commandments but now the gentiles are ready to accept the truth.

As we say thrice daily in the Alenu prayer: in the days of Moshiach the entire world, even the evil people, will come worship ONLY the Creator.

It all depends on us to do all we can to bring...


Copyright © 1999-2019 Rabbi Tuvia Bolton. All rights reserved. No unauthorized reproduction or copying of this material shall occur without prior permission. To subscribe go to www.ohrtmimim.org/torah

Posted by Just Another Hindu at 1:55 PM

Just Another Hindu
Hi, I am Vincent Bruno, American Hindu and Activist. Click on my profile to see my other blogs ॐ. - CONTACT ME: JustAnotherHindu@gmail.com